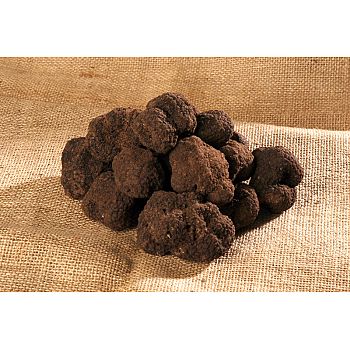 The black hamate truffle, the "Tuber Aestivum var. Uncinatum Chatin" is a truffle with a similar "scorzone"” or shell to the black truffle, however there are conflicting views about the membership of the species. For some it is a distinct species, however some argue that the different environment allows the late maturation, therefore making it a variety of another species.
It has a dark coloured glebe, chocolate brown in colour especially in mature specimens.
The harvest is mostly done in Abruzzo in cooler areas with constant humidity all year round. The summer truffle dislikes the summer drought and prefers its "mezzaombra" exposed to higher altitudes. It is found mainly in protected areas, away from direct sunlight. Located primarily within deep valleys and slopes facing north. The truffle matures in autumn, from October to December, in deciduous forests, especially in conjunction with beech and oak forests, mainly on soils rich in clay.
The harvest period is from October 1st to March 15th.