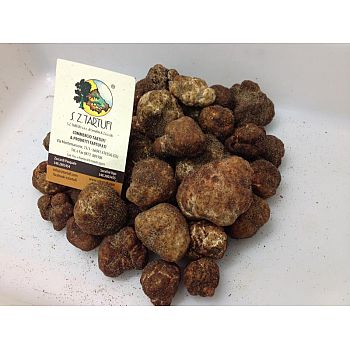 The white truffle, the "Tuber Borchii Vitt", is a truffle highly sought after, despite having a market value lower than the white truffle, it is extremely popular. It is traditionally from Tuscany, Romagna and Marche. The truffle also grows in good quantities in Abruzzo from the coastal areas to mountain areas of other regions of central and southern Italy.
It can often be confused with the "Tuber Magnum", because it has very similar features; irregular shape, smooth to touch and has an off-white color, however when it matures it becomes darker. Even the glebe is initially clear but then darkens. The smell is the main characteristic that distinguishes it from the white truffle. The smell is very soft and pleasant and as it matures it becomes very pungent. It grows mostly in soils of limestone and often in the woods of deciduous and coniferous trees, its ideal habitat is the pine forest.
The harvest period is from 15 January to 15 April.